Walleye Fly Fishing:
It is hard to explain the feeling of excitement that fishing brings to those who love the sport.  This is a story about a bizarre afternoon of fly fishing that reminded me of how exciting, unpredictable, and just plain fun our sport can be.

When my guide trip cancelled the night before I was disappointed not to be fishing, but figured I had work to catch up on and should
probably get started on my taxes (lots of fun).  When one of my fellow guides and good fishing buddy called with news that he had caught a nice walleye fly fishing a local stream, I was instantly intrigued.

I have been fishing since I could walk and fly fishing since the age of 12, but I have never caught a walleye with traditional gear or fly, so the prospect of trying to catch one with a fly rod seemed especially appealing.

I called Jake Goin who is a tremendous fly fisherman and guide who had incidentally caught walleye in this area fly fishing in the past.  He snuck out of his day job early this Friday afternoon and we were off.

At the river, the flows were incredibly high and off color due to water releases from a dam upstream.  There were a few other fisherman around as we rigged up, and the anticipation was starting to build.

Since we are both far from experts when it comes to walleye we decided to set up double streamer rigs as this would allow for the
possibility of a trout, smallmouth bass, or hopefully a walleye on the fly.

When we stepped into the raging current I instantly realized a sink tip line and a rod heavier than my 5wt would have been beneficial for the conditions, but we made the most of it.

Roll casting heavily weighted streamers we began to probe the depths.  We both had a couple suspicious bumps when my line went tight.  I instantly thought WALLEYE!!  As I maneuvered the feisty fish into the shallows I got a look at a beautiful rainbow trout
just shy of 20 inches.  Nice fish, plus I am not home doing taxes and I just caught a beautiful fish – the smile grew.

As we moved up stream and had some more suspicious bumps Jake stepped into the top of a run.  On his first cast I heard a yell and looked up in time to see a very large fish roll on the surface.  As I walked up, the speculation began.  Was it a huge walleye, a big trout, a monster bass?  We had no idea and actually changed theories a couple times during the fight.  When the fish came to the bank we were both amazed to see a monster brown trout attached to Jake’s cone head streamer.  It was a total surprise and had us snapping pictures and shaking our heads.

After heading up stream we found an area to cross and began working down the river.  There were no anglers fishing a likely looking slow area so we gave it a try.  After about 5 minutes my line went tight, and there was a very solid fish at the end.  I saw a flash of brown and again thought WALLEYE!  As I pulled the 20 inch fish closer I realized I had caught a big sucker while bouncing my streamers on the bottom.  After releasing the fish I was contemplating switching tactics when the line tightened again.  This time is was a walleye–and a nice one at that!  As I drew the fish in and examined its large eyes, big teeth, and rough fins, I felt a sense of jubilation combined with a sense of accomplishment.  After releasing the fish, Jake and I took a few more casts, but the afternoon was a success.  We had accomplished what we came for and then some.  We had landed and released 4 species of fish, and most importantly, we had caught up with each other after a long winter and shared an experience that will be with us both for years to come.

The most important part of fishing and a key factor of success is showing up.  There are always 100 reasons not to go fishing, other things to do, the weather isn’t perfect, or the stream is muddy, but if you don’t make it to the river you may be missing out on the experience of a lifetime.

Look forward to seeing you on the river!
–Tad Howard
Colorado Trout Hunters 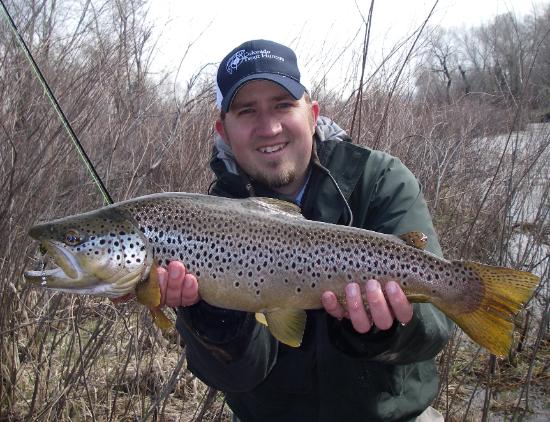 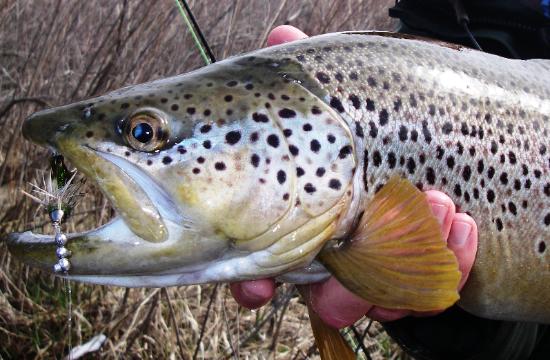 Close up shot of a big brown trout caught on a cone head streamer fly. Notice the amount of weight required to get the fly into the strike zone. 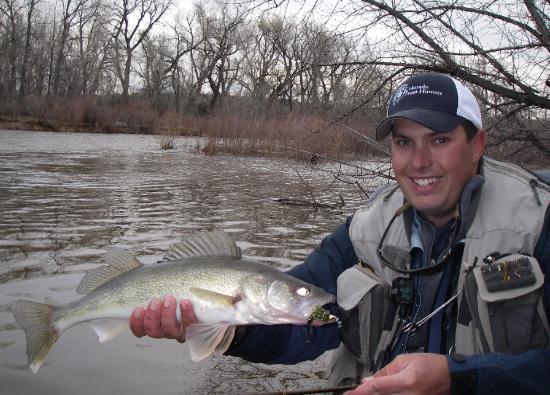 Tad Howard with a nice Colorado walleye caught and released on a streamer. 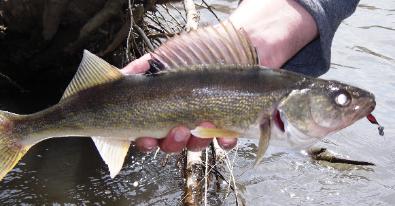